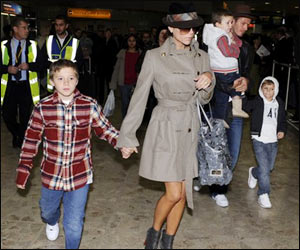 After giving birth earlier on Sunday , Victoria and David Beckham have named their daughter Harper Seven.  This girl joins the three boys of Romeo, Cruz and Brooklyn.

The former Spice Girls singer and husband David Beckham
welcomed the bundle of joy at a Los Angeles hospital on Sunday morning (July 10).

According to a family rep, the tot weighed in at 7lbs 10ozs, with the little one joining three brothers – as Posh and David are already proud parents of three sons, Brooklyn, Romeo and Cruz.

Word of the baby’s impending arrival was the talk of Hollywood on Saturday night when soccer star Beckham attended a BAFTA party thrown for visiting royals, the Duke & Duchess of Cambridge, alone.

David told Prince William, “Victoria really wanted to come but she is just so tired at the moment. She sent you both lots of love”, to which the royal, who is a close friend of the Beckhams responded, “Don’t be silly, send her all our love and tell her good luck with it all.”